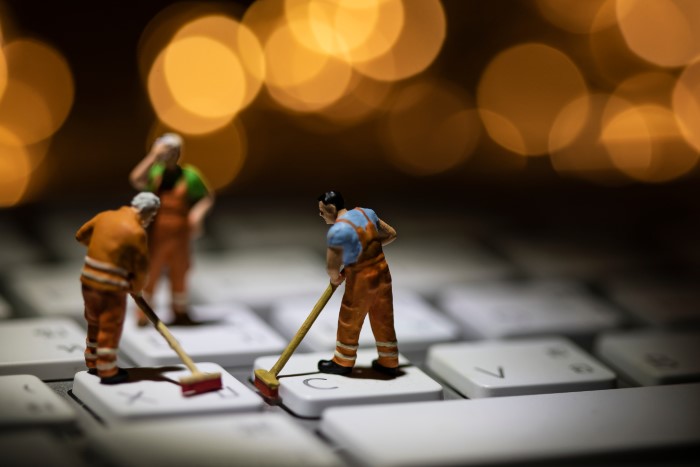 If your computer is more than a year old and you haven’t opened it up to clean it, then it’s likely time to clean the dust out of it to guard against premature hardware failures. Considering how much time we spend in our offices, whether at work or at home, it’s an important area to keep clean and tidy for health reasons too. Today, we’ll take a look at a few ways to keep your workstation clean, first for health purposes and then for performance purposes.

Since the mouse and keyboard are in contact with our hands on an hourly or daily basis, they should be cleaned on as frequent of a basis as possible. For every time we wash our hands, we should think about washing or sanitizing our mouse, too. It may be asking a little much to clean our keyboard every day, but remember, it’s just like any other surface that our hands frequently touch, and that means that it will collect bacteria or viruses at the same rate that our hands do.

Typically we can use an all purpose cleaner or wipes for both, but wiping them with a water-dampened towel will also work. Just make sure to not let water or cleaner collect in the keyboard or the cracks of the mouse. For older keyboards, something stronger (like 75% alcohol) can be used if debris is visible, but remember that alcohol strips paint from surfaces and damages finishes, so use it sparingly if you do.

Back in the days of CRT monitors, there was no reason to get fingerprints on your monitor. If you did, it was time to get out a suspiciously harsh chemical spray to break up the oils and restore transparency with a little elbow grease. These days, though, a lot of devices have touch screens and we can expect to have some smudges from normal use. Be sure to keep some clean, microfiber cloths around to dust and clean your screens. Try using a dry cloth first, and if that doesn’t get all of the fingerprints, then dampen the cloth with water. Again, try not to use enough water to pool on any surfaces; we’re simply trying to trap dust and other debris with the liquid. If you are cleaning a screen that doesn’t have touch, it’s likely good enough to use a dry microfiber to gently dust it.

Inside the Computer Case

Our desktop computers are very good at trapping dust in the case. Typically, computers are cooled with fans and heat sinks, which move the air from outside the box, to inside the box, and outside again. (Liquid cooling is becoming more popular for workstations, but only at the highest levels of performance.) Dust in the computer case acts as an insulator for the heat generated by components, but we want for that heat to move out of the case through the vents.

If there’s a lot of dust in the case, it can lead to component failure (from overheating) or performance bottlenecks (many CPUs will throttle themselves down when the temperature gets too high), so we definitely don’t want to let dust build up over more than a year. If you live in a particularly dusty environment, or have pets, you should probably clean the case once every six months.

To clean the case out, we will use a compressed air duster, unless you happen to have an air compressor handy. We’ll start by powering off and unplugging the computer before opening it up. Every model will be different, but it’s likely that you will take off one or more panels of the case with a phillips-head screwdriver; some models have quick releases or latches instead. Once the case is open, we can dust some of the parts off, blowing dust from the inside to the outside of the case near the vents; you’ll want to do the same with the power supply unit, which has its own fan, and some holes in it where you can blow air from front to back.

There are two very important things to keep in mind when cleaning the dust out of the case. The first is static electricity. Shocking components in the computer with static charges can destroy some components instantly. It’s best to not be on carpeted floors or wearing only socks when working inside of the case. Before putting your fingers near anything inside of the case, try to ground yourself by touching something metal away from the computer. The second important thing is to stop the fans from being blown with the air. This is because the bearings in the fans have specific RPM ratings, and going above those ratings could damage the fan and shorten its lifespan. You can stop the fans with your free hand, but of course, make sure to discharge any static you may be carrying before putting a finger on any components.

← Prev: Common Peripherals to Increase your Workstation Productivity Get More Value from your Tech with a Technology Business Review →