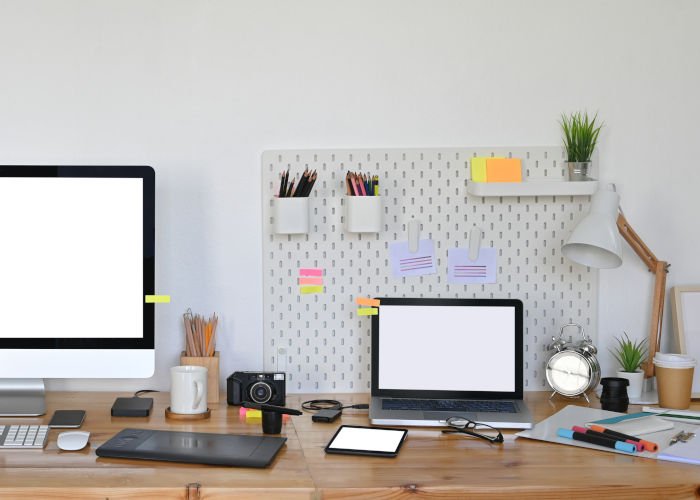 Are you sure that your office setup is the right one for your daily tasks? Did you set up your office for a workflow that has changed since then? Are there a few common peripherals that you haven’t considered in a while? In today’s blog post, we’ll take a look at a few possibilities for increasing your productivity by having a short discussion about common peripherals.

It’s very common for people to use multiple displays at their workstations. If you find yourself constantly moving windows around, or maximizing and minimizing them, then it may be a sign that you don’t have enough space on your desktop. This can even be true if you’re using two displays already, which may mean that you need a third.

Many workstations come with two video outputs (HDMI or DVI), but a graphics card can be installed to expand that to three or four (or more) as well. If you need to upgrade or install a graphics card, make sure to plan well in advance, since they are typically in high demand. Also, if you aren’t yet using a 4k (sometimes called UHD) display, and your workstation or laptop can support it, maybe a higher resolution single display will give you enough screen real estate to fit your needs.

When setting up multiple displays, it’s important to think about what will be on each display at any given time. Typically, if you use the displays as part of your usual desktop setup, you’ll want the displays to be next to each other to create a continuous desktop. If you intend to use one for displaying video or any other kind of monitoring or visualization, then you might want that display to be away from the other displays.

If you’re happy with the feel and placement of your current mouse and keyboard, however, you could also use software to achieve the same thing. Barrier is a cross-platform (Windows, Mac, and Linux) app that will allow you to use your keyboard and mouse with multiple systems. If you’re feeling a little less hands-on, or want more powerful features and support, Synergy is a proprietary version of the same software.

Laptop docking stations have undergone some serious retooling since USB 3.0 and Thunderbolt have been around. The laptop dock used to be a big, bulky plastic cradle to set the laptop on, which would extend the laptops ports and connectivity into something like a desktop. These days, the keyword is “hub” and it’s a device that extends your connectivity by plugging in just one cable to your laptop as if you were just plugging in your charger. If your main workstation is a laptop, but you want to plug in multiple displays at your desk, these hubs are a must.

Here, for example, is a Dell universal docking station that supports extending to three 4k displays when plugged in. Simply plugging in one USB 3 cable to your laptop can provide three displays, gigabit ethernet, and connections to other USB devices. It even provides power to those USB devices if it needs it. This one doesn’t, however, charge your laptop over the same connection, so be warned that hubs may require that you still plug in your charger in the typical way when connected to the hub.

Since online meetings became a much more important part of our working lives a few years ago, one of the most important peripherals is a reliable audio setup. It’s pretty common for people to just rely on the audio algorithms to cancel the echo and noise on our calls, but having comfortable, easy to use earphones makes the call quality much better for everyone. When all of the attendees use earphones in a Zoom call, it’s easier to communicate rapidly without the app turning everyone’s mics off because there was a noise in someone else’s room

Headphones (over-the-ear) and earphones (in-ears) tend to be marketed to us as if they are a statement of personality, but looking at the tech specs of Bluetooth, wireless earbuds can help you find some serious value. If you’re looking for in-ears, look for a bigger driver size (the size of the actual speakers), something 10mm or higher. This eliminates a lot of so-called true wireless earbuds (like Airpods), which tend to be smaller and lighter, but that’s because the larger speaker uses far less electricity to put out the same amount of sound. 12mm driver earphones can get as much as eight or ten hours of use time, whereas some pairs of 6mm earphones that I’ve used get less than four. Large drivers also achieve better bass frequencies (below 200Hz) than smaller drivers, in case you want to use them to listen to music too.

The most important feature of any in-ear headphones is their comfort, though, so make sure that they come with replaceable silicone tips of various sizes. If you can’t find a way to wear them comfortably for long stretches, then it’s time to try something else.

One way to increase your productivity in the office may sound a little radical at first: a desk to stand at. For a lot of us, this sounds like the opposite of what we want… a nice, flexible but supportive office chair. We probably still need a nice office chair with a standing desk (maybe not for $1000), but standing desks exist to help us not be sedentary all day, which can lead to terrible health outcomes when done for hours on end. The idea isn’t to replace sitting for eight hours a day with standing for eight hours a day, but rather, to alternate the two periodically throughout the day. Research suggests that “for every 1 to 2 hours you sit in your office, 1 hour should be spent standing,” but you could split this up by standing for 30 minutes, then sitting for 60 minutes.

Standing desks are height-adjustable, so you can move them up and down when the time to alternate comes. The cheapest standing desks tend to have cranks to do this (which is probably a proper workout in itself), but most have electronic controls to smoothly change heights or go to presets. A standing desk with presets (like this one from Vari) can be very helpful, since you can set them for your standing and sitting heights and recall them with the push of a button when you’re ready to alternate. Cable management may be a bit tricky with a desk that moves, so make sure to see if your prospective desk has additional cable management accessories that can help, like trays or installable power strips.