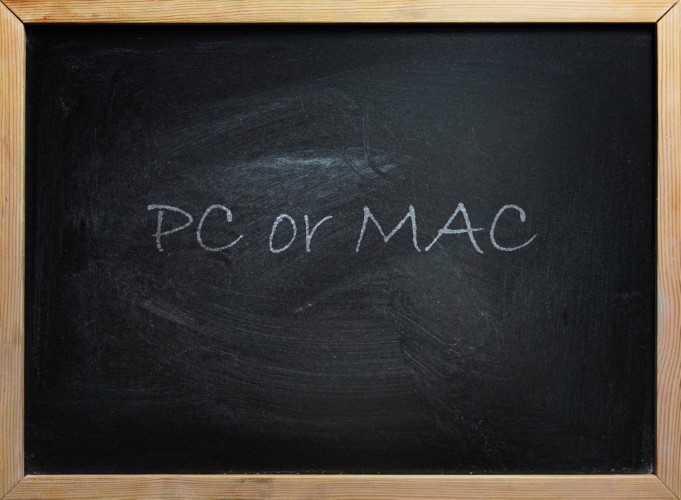 The Age-Old Question: Mac or PC?

It’s possible that you have a preference for using Apple’s desktops and laptops, but it’s pretty rare for businesses to build up their organization’s tech ecosystem with them. There are a few legitimate reasons for this, without even bringing up the cultural difference that Apple fostered in the late 90s and early 00s—that is to say, there are “Mac people” and “PC people” who refuse to give one or the other a chance. Today, we’ll outline some reasons why Windows is far more widely adopted in the business world.

The 90-9-1 Rule for Operating Systems

The distribution of operating systems follows a pattern called the 90-9-1 rule, in which 90% of desktop users run Windows, 9% are on macOS, and 1% use Linux (and/or ChromeOS, or FreeBSD, which macOS was based on). The real numbers are something more like 88-9-3 (depending on what you count as Linux). The sales numbers for 2021 and 2022 confirm that Apple hardware makes up about 8% of computer sales.

This means that only about 1 in 10 desktops and laptops is an Apple machine, even if it feels like more when you look around at a coffee shop or university. One of the reasons that they seem more prevalent than they are is that they are not widely used in office environments, except by “creatives,” like designers, musicians, etc. Work devices are overwhelmingly Windows machines, but they’re simply less visible because of this.

Hardware Plus Software or Hardware and Software

One of the things that makes Apple unique is their role as both a software and hardware company. At the system level, Apple intends its computers to run macOS on Apple-built hardware, while Microsoft (primarily a software company, despite a few hardware adventures) makes Windows to run on whatever hardware you have. Because of this, Windows has had to support a wide range of manufacturers, and gained a reputation of being more inconsistent than macOS over the years. Windows 11 took a cue from Apple, though, and dropped support for a lot of older hardware just for the sake of having a leaner system (even if they said it was for security reasons).

By homogenizing their hardware offerings, Apple made it so that macOS devices need less setup and troubleshooting, which is exemplified by the mantra of Apple users in the 2000s: “it just works.” Having worked in one of the industries where macOS is the standard, however, I can tell you, when an Apple machine has problems, it can be much harder to diagnose or get fixed. This meant that Apple computers with problems—often ones that would be minor hardware fixes on a Windows machine—regularly needed to be fully replaced with high expense and/or inconvenience. This expense is in addition to the huge premium that Apple puts on their devices in the first place.

Inside of the operating system, macOS has continually been “more secure” in two senses: 1) there is far less malware written for it than Windows, due to its smaller market share, and 2) Apple has consistently encouraged users (over the past decade) to get their software from the Apple-managed App Store and not download and install it directly from vendors. Of course, there has always been malware for macOS that’s just as dangerous as Windows viruses, it’s just that the malware industry has to take the prevalence of Windows machines into account when allocating their resources.

Just like on mobile operating systems, the App Store is intended to make the software installation process more straightforward and consistent, but it means that there is a barrier to entry for smaller programmers, and also that Apple can exert arbitrary, editorial, or censorious control over apps. Of course, Microsoft has its own Windows Store in recent versions of Windows (which raises all of the same concerns), but the standard procedure for installing software on Windows is still to get it directly from its creator.

In the business world, systems need to be consistent in a way that allows administrators to control update processes, monitor systems independently, and take control of software and hardware lifecycles. All of these goals are better achieved by not allowing your operating system to also function as a middleman for apps, which can withdraw software or update too slowly.

Personal Preference and Personal Use

Because macOS and Windows have little in common under the hood, mixing them together in an organization often causes needless hassles and difficulties. Sharing files, connecting to networks, deploying software… setting up these tasks can quickly become a headache when mixing together operating systems.

You can imagine a scenario where your IT team wants to deploy something important like EDR, but it turns out that their provider doesn’t maintain the macOS version as well, or it has different features. Even when the same programs are available on both macOS and Windows, they aren’t always interoperable because they use different protocols, different permissions, and the apps are often updated at different times. If a software vendor has a macOS and a Windows version, that doesn’t mean that the two versions work the same behind the scenes.

If you prefer macOS for your personal use then you might just need to keep it to your personal machine. The key to switching operating systems on a daily basis (which I’ve done for the past few years) is to not expect them to run the same way. It may seem like a lot to ask to learn how to use two (or more) operating systems, but it isn’t really that hard when you use them for different tasks; it’s just like when we effortlessly switch between our desktop and mobile devices.

← Prev: Give the Mouse a Rest and Speed up your Productivity Have you Tried Turning it “off” and “on” Again? →